Since I live in Paris, I experience all the seasons of the city. You’ve probably heard the song “April in Paris, chestnuts and blossoms, holiday tables under the trees . . .” Well, sometimes it’s like that in April and sometimes it’s not. Here they have a little rhyme which says, En mars et avril ne te decouvre pas un fil, which means in March and April you better keep your coats on! That’s pretty much true, although it has been known to be sunny and nice in the spring, (just don’t count on it during that April vacation) and cold and rainy in summer. It happens. 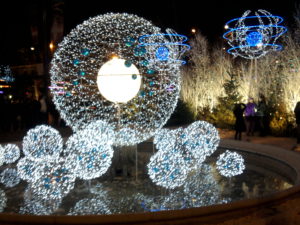 Christmas lights on the Champs-Elysees

What about winter? Most people don’t think of coming to Paris in the winter, unless they get fantastic off-season deals or want to avoid the crowds, or have free tickets from a relative. I’ll be honest, I dislike winter in general, but forced myself to open up my eyes and my spirit to see Paris in the winter as frozen picturesque, but picturesque all the same.

The thing about Paris is that, winter or summer, April or February, nearly everything you see draws you back to another time of history, steeped in a dreamy, artistic perspective. Every two minutes you’ll want to stop and snap a photo. This is nearly as true in the winter, when the biting winds or freezing rain slap you in the face as you scurry to the métro. No, you can’t hop into your warm car with heated leather seats. You have to do what everyone else does: bundle up with scarves, hats, and layers, and make a dash for it.

Paris winters are moderate, in comparison to, say, Minnesota or Sweden. Some days, like today, are in the low 50s or upper 40s, rather balmy and kind. Winter in Paris can also include somber, low-hanging gray clouds, making it appear later than it really is.

What can you do in Paris in the winter? The cafés warmly beckon you to snuggle up with a steaming chocolat chaud (sometimes it’s very good regular chocolate, and other times it’s decadent melted chocolate with a separate pitcher of hot milk) or café au lait, often called café crème by locals.

Paris has hundreds of museums. You can buy a museum pass, good for a few days of frenetic museum-hopping. Many museums are free the first Sunday of each month. There are also hundreds of art galleries and dozens of plays, as well as movie theatres with up to 20 screens.

Don’t miss the Champs-Elysees in December. Each year the broad avenue explodes with lights in the trees lining the sidewalk all the way to the Arc of Triumph. The annual Christmas market, Marche de Noel, is a collection of white-washed wooden booths proffering treasures and gifts, candles and edibles. The scents of waffles and crepes fill the frosty air. As you indulge, you forget that your toes are half frozen.

If you come to Paris in the winter, you can usually still see everything you’d like to see, if you dress in layers and do not forget your scarf, gloves, and hat. (It’s surprising how much warmth a simple scarf can add. That may be why the French, men an women, use them all year-round.) As part of your winter tourist plan, you can duck into a pub or café, or one of the pricey but glamorous department stores every hour or two to warm up.

If you can’t handle doing everything by foot, there are heated boat rides, heated taxis, and double-decker busses. One thing Paris doesn’t lack is tours, and some will be heated and motorized.

Whether or not there is chill, wind, or snow, there are whimsical ways in which Paris manages to thrust herself a shelf above the washed-out dreariness of other cities. It’s simply magical . . . even in the dead of winter. February 20, 2013