Have a seat and get some coffee. I haven’t seen you in a while!

I guess I was waiting for lightening to strike, as I pondered what I should tell you. Lightening did strike, in a way. I don’t want to overstate it, though. I just made some decisions.

Let’s go back a bit and I’ll catch you up. I’ve wanted to be a fiction-writer since the age of 10. I started writing at the age of 11,  but at age 18 I began a season of feeling inadequate and didn’t write for 2 decades (sadly, you read that right.)

I started writing again in 2009. I’ve written 5 novels, 4 of them inspirational, and have attended some writing conferences. These led to a few encouragements, but no published books. 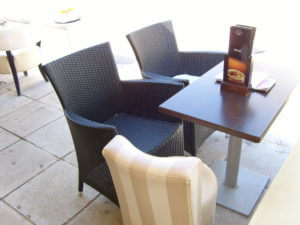 Meanwhile in the traditional publishing world, things weren’t going well. I could say they were tightening like a noose, squeezing out most aspiring writers, making it harder and harder to publish with a company. Some of this, ironically, was due to the self-publishing movement itself. While the revolution in self-publishing made it accessible to everyone to publish, it made it even harder for newbies to publish traditionally, as publishing houses felt the squeeze. At the same time, floodgates were opened for anyone who wanted to write a book. Sometimes the quality was, you could say, all over the map.

Just as discouragement was settling in again, I thought about self-publishing fiction. (Previously I’d planned to traditionally publish fiction and self-publish non-fiction.) Up to now, I have 4 published non-fiction works, Magical Paris, Real French for Travelers, Mental Habits for Happiness and Success, and Mental Habits for Believers. I also started a few blogs. (Oliver’s France, Very Best Self, and this one, Kyle Hunter.)

So I am not starting from zero. I just need to leverage what I’ve done up to now and get going. Again. (I noticed that I wrote a similar blog at least twice over the last several years. As I hang my head I am determined to be embarrassed enough to make it different this time!)

What does that mean for this blog? All the pieces aren’t crystal clear yet, but one thing you can expect is more posts from me, more fiction news and excerpts, and finally some books. I hope it will be fun for you to read and bring you more into the loop of my writing.

Thanks for patience and for reading! See you soon!