Colette will never forget the day her mother bundled up her few pieces of clothing, took her hand, and trudged through the Haitian hills towards the orphanage.  Colette didn’t know where she was going or why she had all of her possessions with her. Nor did she understand why her mother never spoke a word, but wept every step of the one-hour trip.

The lady who welcomed them at the entrance of the primitive stucco building smiled kindly, a pattern of worn tracks across her face showing hardship and many years. Colette’s mother stooped towards her little girl and wrapped her arms around her skinny six-year-old frame. She held on for several endless minutes as her body shuddered with sobs. “Bye, baby,” she rasped through her tears. “You’ll be okay now.”

Colette settled into life at the orphanage, but missed her mother every day. She continually wondered when she’d be able to go back home. “Your mother isn’t able to take care of you right now,” explained the older woman gently. “She loves you and wanted you to have everything you need that she cannot give you.” Colette didn’t understand for a long time, and though the pain never disappeared, it gradually faded.

A year later came the news that a woman in France wanted to adopt Colette and bring her back to France. A new mother, a new country. Though everything was new and different, Colette learned quickly to love her new mother, Sabine. Sabine was a single lady in her forties who had always wanted a child. She used a small inheritance she’d received to pay for the adoption. Two years later, she adopted another little Haitian girl, Sephora. Sephora became Colette’s new sister. She had a new life and a new family, and a hope to be happy again.

Three years went by. Sephora and Colette were living happily with Sabine when the bad news struck. Sabine had cancer. After a courageous struggle for a year and a half, Sabine died, leaving Colette and Sephora motherless once again. They went to live with their godmother and her husband. The couple was kind and tried hard to create a home for the girls, but after a year they had to admit it wasn’t working out.

Lydia, Sabine’s friend from church, heard about the situation with Sephora and Colette. She lay awake at night thinking about them. The two young girls had been through so much, and she so wished she could do something to help. She herself had three children, and a husband out of work. What could she do besides pray? Yet the thought haunted her daily. She felt powerless.

Maybe someone she knew could help. She sent out an email to everyone in her address book. Word would get around and perhaps someone would think of a solution.

One day later Lydia received a response from her friends in Alsace, a young couple with two children of their own. They were deeply moved by the plight of Sephora and Colette and suggested that the two girls come for a visit. They did, and the young couple felt an instant bond with the children. Could they make room in their home for two Haitian girls who had lost two mothers? As workers with a non-profit humanitarian organization, they didn’t have much money, and they had two small children of their own. They talked and prayed together about what they could do.

Sephora and Colette returned twice more for weekend visits. It became increasingly clear to the young couple that they were meant to take in the two girls. Sephora and Colette blended into their family and with their children in a natural and effortless way. Yes, there would be challenges, but their love and God’s strength would help them.

Today Sephora and Colette are living happily in Alsace with the young French couple, rediscovering family love and security they thought they’d never have again. What made this possible? One small act of compassion. Lydia had said to herself, “What can I do? I can only send an email and pray. That’s all.” That small act made all the difference to Colette and Sephora, two young Haitian girls whose hearts had been broken and hopeless many times. 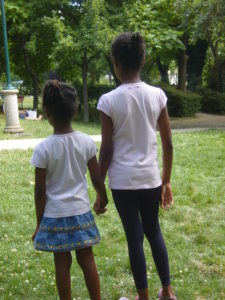 Never think that your small gesture can’t possibly change anything. The smile to a pressured cashier, that letter or word of encouragement, the overdue apology. You just never know where it will lead. Could even change the lives of two little girls. Could lead to even greater results. You just never know.