It Was February 5th 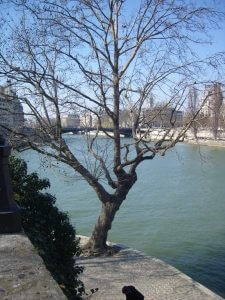 It was February fifth. The glossy wall calendar hanging inside a kitchen cupboard still displayed a snowy photo for January. Olivia flipped the calendar to the correct month and stared at the day for a moment. She’d be late for work if she didn’t get a move on, yet there was something significant about that date. She furrowed her brow. Was it the birthday of someone she used to know?

James. It was his birthday today. Why, after she hadn’t seen or talked to James in four years, did his birthday graze her consciousness each year? She’d never see him again, not after he’d moved across the world for an ESL stint in South Korea, and subsequently cut off contact. What was he doing now? Had he married a Korean and settled in Seoul? Did it matter? No, she was just curious.

Curious and… well there was something else down there gnawing at her. How could he have done it? She’d written twice, but…nothing. She must not have evoked more for him than bland benevolence, the kind of response he’d give to his favorite cashier or dog-sitter. After all the coffee dates, shared laughter, and study sessions for the grueling masters degree program. He didn’t know what those moments had created in her. Way back then.

Why think of it now?

This is an piece from an unwritten (so far) story. Maybe it will lead your imagination somewhere! Any stories come to mind?