Hint: It’s easier to find the box set with the links below than directly on each storefront because The Second Chance is a very popular title! 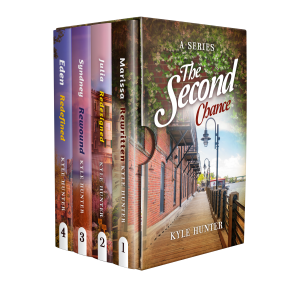 Marissa Rewritten, Julia Redesigned, Sydney Rewound, and Eden Redefined. Who are these women? Marissa, Julia, Sydney, and Eden were inseparable friends in college, but life took them in different directions. They loosely kept in touch through Christmas cards and occasional phone calls (and eventually emails and Facebook!) But 25 years later, they all find themselves single again and mostly empty-nesters…in a different chapter of life. So, at Eden’s instigation, they start getting together twice a year. Follow each woman’s story and fall in love with all 4 of them. You’ll feel like they’re YOUR best friends too!

Overview of each book (For more detail or to read the first chapter of any book, click on each individual book listed on the homepage.)

Author Marissa Thompson has had writer’s block since her husband died almost two years earlier. Both her career and her historic Raleigh home hang by a thread. Prodded by desperation, she heads to Wilmington, North Carolina for a Civil War research trip, hoping for inspiration for a new historical series. Everything begins as planned until she encounters a man with common ground and a quest of his own.

Following the death of her mother, Julia De Luca discovers decades-old letters from distant relatives in Italy—the only family she has left on earth. Could the letters hold clues to why those relationships ended abruptly when she was ten years old? She longs to reconnect with her family, but how can she after nearly four decades? Her compelling desire to locate them leads Julia on an impulsive trip to Florence, Italy. There she discovers love, and the challenges of a renewed Italian family. 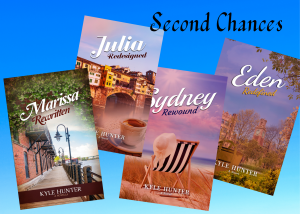 Sydney Bennett is a frazzled high-school teacher and a single parent of a teenager. Her life is anything but calm, but one ordinary day, an unexpected incident triggers the memory of a past secret even her closest girlfriends don’t know. Her quest for closure leads her back to her hometown for the summer. She never expects to run into the man who broke her teenage heart decades earlier, nor the power of grace and new beginnings.

Eden Godfrey has been a widow too long. Or so her friends tell her. Her brief stint with online dating didn’t end so well. Eden turns her attention to a more pressing objective. Having sold the family business, she wants to find a bigger story where she can help people in need. To accomplish this, she returns to college to complete her degree. Along with stumbling across the man she regretted pushing away, she discovers a suspicious scheme that threatens to derail her dreams once again.

To Purchase or learn more

Note: The Apple book cover is different than the regular cover, due to Apple cover requirements. The