Is there any way to recapture what happened under a Christmas moon one December?

Nikki has loved Mike for as long as she can remember. Mike has his own past hurts to resolve, having lost 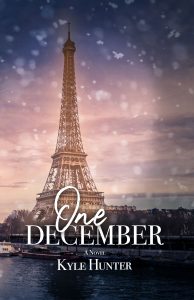 both parents in an accident when he was fourteen. He’s tried to escape those painful memories by leaving New York and starting a new life on the West Coast. New facts indicate, years later, that his parents’ deaths might not have been an accident.

Nikki is devastated, believing her one chance for a relationship with Mike is over.  She impulsively takes a one-year teaching opportunity in Paris, so that she can face her own fears and get over Mike.

If Mike and Nikki run away, how can they find each other again?

“One December sizzles with romantic tension, taking the reader on a roller-coaster ride from New York to San Francisco, with a delightful detour in Paris.  I couldn’t put it down!”

– Elizabeth Musser, author of The Secrets of the Cross trilogy and The Swan House.

Buy in the following stores