The Greatness of Being a Beginner

At times it’s uncomfortable being a beginner. I look at my Italian book and I don’t know how to say anything useful, other than “the dishes are in the kitchen”. Um…where else would they be?

Same thing happens in the pottery studio. I look at the pieces of art made by professionals who use the same studio, and it makes me feel pretty small. I wonder, just how LONG will it take to make something that doesn’t look like an artifact from Pompeii? (post-volcanic eruption, I mean…)

And I won’t get started about fiction-writing. There, the learning curve is so far out, you can’t see the end. 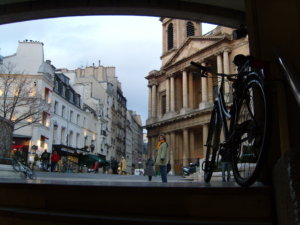 But then I had another thought. It can also feel satisfying to be a beginner, because if I wasn’t beginning at something maybe I wouldn’t have had the guts to start it at all. It takes courage to start something. To face the guarantee of being bad at it. To slog through the foundational steps repeatedly— sometimes for years— until it begins to look like something.

I was having a bad day in the pottery studio. What was supposed to be a pitcher ended up a slimy glob on the porous clay-recycling slab. I started over and the next effort was marginally better. Across from me another potter whirled away at her wheel, hunched over the spinning orb, covered to her elbows with what looked like mud. She glanced up and said, “I’ve had one lesson. But even you feel the same way I do? I’m going to need a lot of patience!” A tinge of despair laced her voice.
I nodded and said, “Yes, I often feel that way, even after a year and a half. Patience will serve you well. Lots of it.”

A few minutes later another woman came by and asked her how she was doing. Her answer was firm: “Determined!”

I smiled. Great answer. She’ll eventually be pleased with her results. It doesn’t really take talent to learn something. It takes determination. And while that doesn’t level the playing field, it makes the game look less hopeless for the rest of us. Talent certainly helps, of course, but it isn’t the only pass to get through the gate.

That one word, “Determined”, empowered me about my efforts and made me feel better about the wonky results. The other word, “Patience”, is its spouse. Both words can make up for a lot of runny clay mishaps and other creative challenges!