A Promise in Provence

The Provence Series takes you with Bree and Lauren, best friends and business partners, to one of the loveliest regions of France. It’s not always idyllic in the land of lavender fields and cliffside villages. Join Bree and Lauren as each woman discovers her unique journey—and surprising romance.

A Promise in Provence

Lauren is at a turning point. If only she knew where to turn. Her long-term relationship with Mark is fading 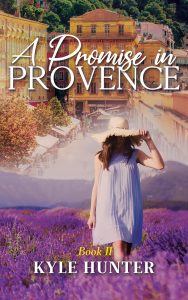 fast. Instead, she feels drawn to Jean-Pierre, an attractive Frenchman she’d met the previous summer. When she’s laid off from her job as a chef, she decides to go see him in Provence, France.

Mark can’t get Lauren out of his heart, even though it’s been close to a year since she asked him for space. When she goes to France, he’s afraid he’ll lose her for good. That is, until he decides to go there, too, as a last-ditch effort to win her back.

At first, Lauren’s angry that Mark has followed her to France. But a joint desire to help a young refugee boy leads them to work together. Lauren finds herself torn between the two men. Worse, she’s confronted with obstacles in helping the boy and even greater obstacles within herself.

Buy at the following stores

Box set on Kobo (both eBooks)

It is possible to leave a review on all of the above storefronts (using the same link), regardless of where you bought the book. (The same review is fine!) It would mean a lot to me if you’d consider doing that after you read the book! Thanks so much!